Timko joins the 1,000-point club, second junior to do so in MHS history 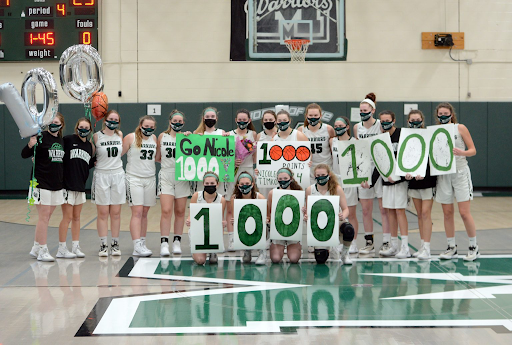 Nicole Timko became only the second MHS junior in history to score more than 1,000 points during the course of her MHS basketball career on Feb. 9 when she sank a three-pointer at the top of the key against Pope John Paul II.

The timing was perfect, as the Warriors were down 23-18 when she hit the trey.

This moment rallied the team, who, after posing with Timko with congratulatory balloons and signs, resumed the contest with renewed vigor. Timko was especially engerized. She would go on to score 10 of her team’s-high 18 points in the fourth quarter and overtime, leading the Warriors to victory, 39-37.

Timko is only the eighth player in program history to accomplish this feat. Renee Womack, class of 2008, was the only other player to do so by her junior season.

Timko said that she was “proud to be the second junior to accomplish the record. [And I’m proud] for working hard and pushing myself inside and outside of practice. I am also thankful for amazing teammates and coaches who also helped [me] to get here.”

Timko, who started playing at six years old, has been a part of the varsity team at MHS since the 9th grade. She also plays AAU basketball for the Lady Running Rebels. She hopes to continue basketball in some form during college, and maybe even after college as a potential side career.

Due to the COVID-19 pandemic, the basketball team has had to adjust to many new regulations, such playing with their masks on. Still, Timko says, “[I am] extremely thankful to be given the  ability to play during the pandemic and [I am] just happy that the team is still able to practice and compete.”

Her next game was a contest against Frontier Division leader Phoenixville on Feb. 10, the Warriors’ third consecutive game in three days.

“It’s hard because we don’t get much practice time or time to prepare for teams, so you kind of just have to go off the fly,” Timko said. Yet, this didn’t stop her. She led the team to another victory scoring 20.

Timko listed the reasons why basketball means so much to her.

“ I like playing basketball because I enjoy the fast-pace tempo and having to think quickly on my feet. I enjoy always being able to work to get better, preparing strategically for games, and of course being able to play with all my friends and teammates. I love how I can play basketball and be distracted from any stress in my life and just relax and have fun.”