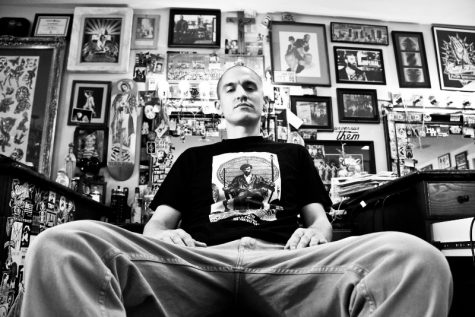 Since posting his first YouTube video in 2007, independent rapper Wax has gained a strong fan base in the underground world of hip hop. The man who came from humble beginnings in the small town of Dunkirk, Maryland has now released two rap albums along with three mixtapes and has reached over 300,000 subscribers on YouTube. There was even a brief period of time where he was signed by Def Jam recording label but ultimately left due to creative differences.

Wax, A.K.A. Michael Jones, is known for rapping about his struggles with alcoholism and the typical problems that happen in the lives of ordinary people that many find uncomfortable to talk about. Wax has the ability to showcase the the glory of the small things in life through music and such is the case with his latest mixtape, The Cookout Chronicles.

In The Cookout Chronicles we get to see a side of Wax not seen before. We get to see Wax with a new way of life. He is now someone who is content with who he is and his current place in the music industry but is also combatting his alcoholism instead of just giving it recognition.

“I don’t want to be really famous anymore. I like that I exist as a normal human being,” Wax explained. “Currently I am more focused on being happy in general than being happy with my place in the music world.”

Wax gives us a taste of his new mindset right off the bat with the first song on the mixtape “Reborn”. In the song Wax confronts his past ways of yearning to be at the top of the music industry and drinking until he’d black out on a regular basis. He makes it clear that he has changed and is on the path to recovery.

When asked about trying to overcome alcoholism he replied, “I used to be a heavy drinker that had fun with alcohol, but at this point in my life it has caught up with me. I wish I could just have a few drinks like normal people, but once I have a few in me I have to consume until I pass out.”

The Cookout Chronicles has a very mellow and relaxed vibe to it that, like everything else Wax creates, is completely unique. “As I get older I feel like my music gets more mellow and I enjoy that type of vibe more,” he explained.

All of Wax’s music can be found on YouTube on his channel waxandherbalt or can be purchased on iTunes. He will be going on tour to showcase The Cookout Chronicles in November but before that he plans to release an “awesome” side project in October.