MTC to perform The Tempest this weekend 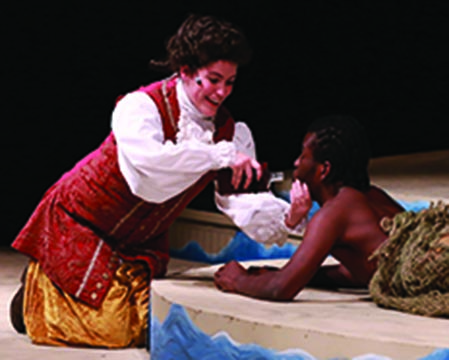 Trinculo, played by junior Jane Vitelli, offers Caliban, played by Tyler McCants, a way out of his misery during MTC's version of William Shakespeare's The Tempest.

“They expect it to be Shakespeare, like they won’t know what’s happening, but it’s got a lot of themes that translate today,” said Cavallo who is playing Alonsa, a female version of the play’s original character Alonso, in Methacton Theatre Company’s upcoming fall performance.

The play does pack emotion, not only for audiences but for the actors as well, added Cavallo.

“The kids who plays my son and I—we had to take a breather yesterday because we were sobbing during rehearsal.”

The plot of “The Tempest” can be likened to some modern dramatic films. Set on the high seas and on a remote island, “The Tempest” is, according to junior Charley Kinsky who plays Francisco, “a story of love loss, tragedy, anger and wrongdoing.”

A wizard named Prospero has lived on a deserted island with his daughter Miranda for 12 years after his younger brother Antonio overthrows him as Duke of Milan. They live on this island with a beast named Caliban and a sprite, Ariel.

Prospero creates a storm to thwart his enemies sailing on the sea near the island. Among them are his traitorous brother Antonio, Alonso, the king of Naples, and Alonso’s brother, Sebastian. The travelers are stranded on the island, and as they come into contact with Prospero and Miranda, trouble ensues. There is love at first sight, exploitation of deformed mutants, ghosts and a murder plot.

Tech crew member Rebecca Woodward, junior, says the best part about this show is the lightning and rippling water the crew has worked so hard to make happen. A challenge they ran into during the production of the play was “getting the backdrop to stay flat and unwrinkled,” she said.

Cavallo adds that the audiences should be prepared for some comic relief too.

“It’s funny. There’s two drunk guys that are rolling around the stage half the time. It’s a funny show!”

The show runs from Nov. 5-7. The first two shows begin at 7 p.m. The final show begins at 4 p.m. Tickets are $15 and are sold online on the district website.